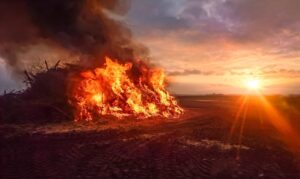 Over 170 people killed in recent Kerala floods, Thousands lost their homes and belongings. Emotions poured from all corners of India and people spontaneously showed empathy and they were more than willing to give a helping hand to the people of Kerala. Absolutely fantastic to see the “display of humanity” at it’s best.

At that heat of the moment there were some honest, but blunt voices that came about, describing the event as a     ” manmade disaster “.  But it was felt that it was inappropriate to tease out and blame anyone in the middle of the crisis. The priority was to help the people of Kerala and people did help in a big way.

Today the keralites are limping back to normalcy, but life elsewhere has gone back to default position of ” Indifference”.

I can’t resist quoting an example of what is happening, right at my apartment. We have  very long corridors inside our 12 story apartment. Right from the day I moved into this apartment, I noticed something odd. Through out the night, our long corridors are brightly illuminated, and hundreds of lights gives an ambience that you only get to see it in huge malls.

Now……We all know that global warming is at the tipping point, yet we dont seem to understand that simple every day action of our’s, can add up substantially, to help reduce the  problems that we created for our grandchildren.

Personally, I  switch off the corridor lights in my floor everynight without fail, but I failed miserably to convince my fellow mates, so far, to do this simple deed.

Why wouldn’t most people act, though they genuinely care?

The answer lies in the human psyche and how human brain is hardwired, only to focus on day to day activities, and not worry about the distant future.

Brain’s Priority is “Instant Gratification”, and not the  “Long-Term Goal”.

Unfortunately it  is human nature to behave that way.

Fortunately it is also human’s ability to overcome such inherent disability with reasoning and tangible action.

There is a famous quote “At the precipice, people change”. Unfortunately we are in the middle of precipice without much action

Tags: children's future, Global warming, health impact
Previous post
Go to jail for not vaccinating your child. Is it fair?
Next post
Meat eaters : Be mindful

Say no to fruit puree for babies