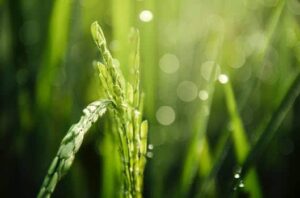 Rice cultivation and Meat farming are not environment friendly

The word “Farming” sounds so “Natural” and good. Our lives absolutely depend on the food from farms and therefore it is only natural that we see only the good side of it.

Among the 8 million species that dwell on earth, only human beings have exploited the tool “Farming”. We human are programmed to look after our own species and therefore our selfishness is understandable. But farming has always impacted the environment that we live, in a major way.

We never had a choice but to destroy the forests and use it for farming. But loss of natural resources is inevitable and we would have to pay the price for it.

Intense farming undoubtedly causes global warming. In today’s newspaper, I got to read about the prospect of world’s poor facing the calamitous threat of hunger as a direct result of global warming.

The irony is that the efforts to overcome food shortage by intense farming causes climate change that increases the risk of food insecurity for the most vulnerable group, “The poor”. Typical example is the effect of Palm oil production industry. Palm trees were planted on the land acquired by deforestation. This is one of well known man made environmental disasters, that followed the exploitation of land that was meant for the natural forests.

We face the threat of water scarcity now, more than ever before. We all should know the fact that rice cultivation involves huge water consumption. Rice paddy fields are becoming increasingly a liability.

But the bigger threat is the meat industry.

Here is a good reason to become a vegetarian. The statistics from the latest study states that if a person (big meat eater) gives up meat and becomes a vegetarian he could be saving an awful lot of water. He could be saving whopping one million litres of water a year. That is because of the following fact

By becoming a vegetarian, we would reduce water footprint on farming, by a third.

Conserving our forests land and water resources are the key to our children’s future. Awareness of these facts are so vital for all of us

This quote from Cixin Liu sums up the reality

“Humans are selfish, and because of innate selfishness, I am very confident that we can overcome any amount of environmental destruction. I am absolutely positive about human survival, but pessimistic about the survival of other species”

In otherwords .. “Human will continue to destroy the environment and will successfully endure hardship that he has inflicted upon himself ”

Tags: meat eating not good for environment
Previous post
Emotion vs Logical reasoning
Next post
Antibacterial Soaps, Paint and even antibacterial Light bulbs!!! It is crazy!!!