Nipah is striking back? 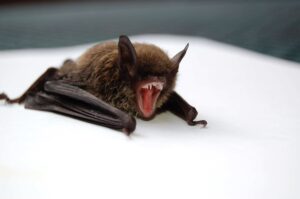 Nipah in Kerala. Bat and Nipah

Last year in Calicut,Kerala several people died as a result of an uncommon viral infection called “Nipah”. It’s a fact that about seventy percent of people who tested positive succumbed ,making it a scary news. But life has gone on and people returned to work and play.

This year again a case of Nipah has been reported, this time from Ernakulam, a district about 200 km to the north of Calicut.

So what’s Nipah?
It’s the name of the virus which causes the disease. The starting symptoms of this disease could be fever and cough and are fairly similar to that we see with usual trivial infections that we come across frequently. These signs of fever, cough and headache could be followed by drowsiness, disorientation and mental confusion. These signs and symptoms can progress to coma within 24-48 hours and could result in mortality

Nipah is what’s called a Zoonosis. Which means it’s spread by contact with an infected animal. In case if Nipah the agent is most commonly bats, especially fruit eating bats. Pigs are also known to harbour the virus.

Is there treatment?
Good intensive care is needed for people affected with Nipah. There is an antiviral drug available which can be helpful. There is also an experimental drug that’s now in stock with the Government of India and can be used in exceptional cases.

How does it spread ?
Mainly it’s spread by contact with infected bats or less commonly pigs . Unfortunately infected bats show no symptoms and therefore there can be no previous warnings like death of bats in an area. . It can also spread by consumption of fruits that have been half eaten by bats . Spread is also possible by consumption of raw date palm sap and related products that are contaminated by contact with infected bat. It can spread from person to person but only on close contact. Till now the affected people have been those in close contact like nurses and family members.

Do we need to fear ?
It’s a rare disease and in the current outing it’s been diagnosed probably very early. The chances of the virus spreading far and wide is non existent. There is therefore no reason to panic . But it’s good to take the following precautions.

Where can I get it tested ?

Diagnostic tests are available only in specialised labs. Do not approach the usual commercial labs for the testing.

What precautions we could take ?

1. Avoid non essential travel to the affected areas.
2. Avoid non essential travel altogether when you are having fever or any other serious communicable disease.
3. Frequently wash your hands with soap and water or sanitiser especially during travel and after visiting crowded areas.
4. Consult doctor immediately if there is any health concern . Dont attempt home cures.
5. Stop the habit of visiting ailing relatives and friends in the hospital. Send a Get Well soon card instead
6. Never take healthy children to hospital.
7. Don’t spit in public places .

Everyday we encounter millions of bacteria and virus in the places where we travel, in the food we eat and the air we breathe. There can be no microbe free existence. So there’s is no need for panic. A little bit of caution is all that is needed

When should I introduce solid food/weaning food for my baby? In "Child care"
Previous post
Pregnancy, Fertility, Breast pump, In Labour monitoring…Women’s Gadgets on the boom
Next post
Brush your teeth to clean up your brain